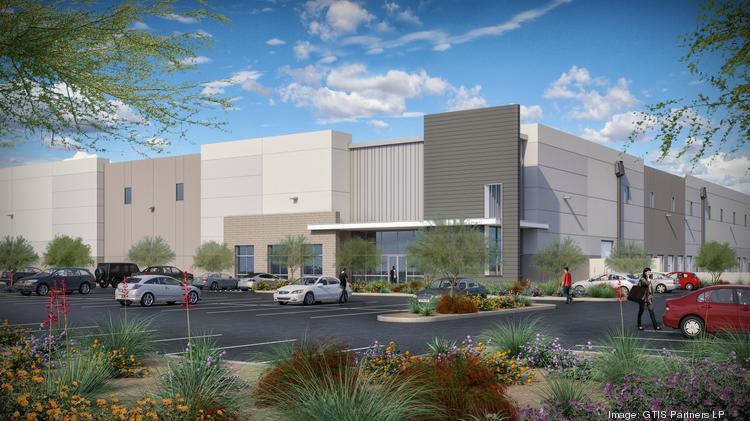 A joint venture composed of New York and Chicago real estate developers is planning to build a 490,000-square-foot logistics center in the West Valley.

GTIS has formed a joint venture with Chicago-based Baker Development Corp. and New York-based Foundation Capital Partners to develop a 490,000-square-foot logistics center next to the Goodyear cargo airport runway.

While this $45 million project is GTIS Partners' 13th investment since its metro Phoenix debut in 2009, it marks its first industrial project, said Josh Pristaw, senior managing director at GTIS.

Like its build-to-rent project at the Cadence master-planned community in Mesa, this industrial spec warehouse called Yuma|143, also is located within an Opportunity Zone.

He said metro Phoenix is one of GTIS Partners' top markets because of its job growth and demographics.

Stephen Tanenbaum, head of Industrial/Logistics at GTIS, said he plans to begin construction this month on the project near Interstate 10 for a delivery of January or February 2022.

Two buildings will be built, with one 300,000-square-foot warehouse building featuring a cross dock, where trucks can unload big pallets on one side and repackage them into smaller units and load them on the other side of the building, Tanenbaum said.

"It's more efficient when you have high throughput where you can drop it off one end and load on the other side," he said. "The cycle never stops."

The other 190,000-square-foot building will offer a rear load feature, with office space on one side and docks on the other side.

"There's a lot of synergy going on along the I-10 corridor," Tanenbaum said. "Companies are leaving California because of the attractive economics of operating their businesses in Phoenix, including lower labor, real estate and general operational costs. Not only does this location on the west side of Phoenix serve the metro Phoenix market, it also enables companies to service the Los Angeles metropolitan area, which is only 5.5 hours away."

Plus, he said, the fast-growing residential market on the west side of Phoenix provides both attractive labor and a source of demand for companies distributing in Phoenix.

While the company has found several Opportunity Zone areas for residential development, Pristaw said it hasn't been as easy finding OZ areas for industrial here, but said he hopes to find more.

Yuma|143, which will be built at 143d Avenue and Yuma Road, is the last piece to be sold within the Airport Gateway Industrial Park, said Lori Gary, director of the Economic Development Department for the city of Goodyear.

Baker Development, which is part of the joint venture with GTIS, has two other projects within that industrial park, she said.

"Baker has been great to work with," Gary said. "I'm extremely pleased they find Goodyear to be a good market to invest in. This would be their third project."

Back in 2014 as the local economy was beginning to heal, Gary said city officials began working with the owner to develop the land, but it didn't get any traction until the developer installed infrastructure on the property, including water and sewer lines and roadways.

Once the first company located there, it's been a regular stream of new tenants over the past six or seven years, she said.

"Getting the first one is the most difficult," Gary said. "This industrial project is now fully built out."

As more infrastructure has been installed throughout Goodyear, it is gaining more traction, she said.

"Ten, 12 years ago, Goodyear had a lot of land," Gary said. "We were land-rich but infrastructure-poor. For the last 12 to 15 years we have been focused on working with developers getting infrastructure put in." 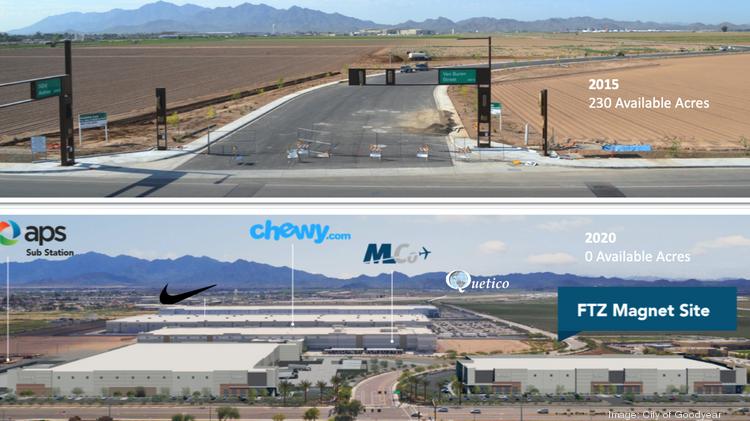 A before and after picture of the Airport Gateway Industrial Park, where multiple tenants began showing interest once infrastructure was installed.

PROVIDED BY CITY OF GOODYEAR

Goodyear currently has 3.8 million square feet of industrial spec buildings on the market, including the Lincoln Logistics 40 building Nike had purchased for $70 million in August 2019 but then last summer pulled out of its plans to open there.

"And we have another 2 million square feet under construction," she said, not including the Yuma|143.

Phillip Hernandez, research manager for Colliers International in Phoenix, said more than 90% of industrial properties under construction are located within the southwest and northwest market clusters.

"That's where all the activity is happening right now," he said. "It's kind of a crazy market right now because developers are going in and building spec with anticipation that it's going to go leased up. Because product is getting leased up so quickly out there, they don't see that much of a risk building anything that large."